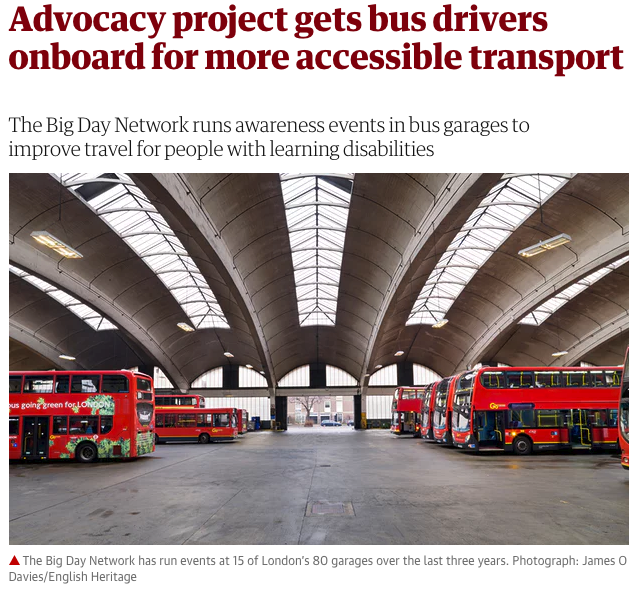 For Mario Christodoulou, buses are essential. “I use buses every day to get to work and to the shops – it is my only way of travelling,” he says.

The network has 50 members from self-advocacy groups in London – 37 people with learning disabilities and 13 supporters – and has run events at 15 of the city’s 80 garages over the last three years in partnership with George Marcar, a TfL driver communications manager, surface transport. Discussions are held in a stationary bus, which helps people to visualise the issues raised.

Areas of debate include confusing signage or drivers being unaware of so-called “invisible disabilities” – to find out more, read the rest of my article in the Guardian.

Of the many thorny issues the voluntary sector is grappling with, bidding for public service contracts is among the biggest. The sector was therefore taken aback in December, when the government allowed less than a month for its modernising commissioning consultation. Read my article for The Guardian’s voluntary sector network here.

I’m supporting the two-day online campaign, One Month Before Heartbreak, that took place this weekend against planned reforms to Disability Living Allowance (DLA), the disability benefit that allows tens of thousands of disabled people to get out and about from residential homes. The DLA consultation period ends on February 14th, Valentine’s Day.

In the words of blogger Brianb: “Many of us, concerned at the way the coalition government is bullying, victimising, stereotyping, abandoning and, stigmatising those of us who live with disability, have decided to publish blogs almost simultaneously to draw attention to these injustices being perpetrated”.

Given the warm glow the government wants to create with its big society approach, the cut seems even more unfair, and shortsighted, and as The Guardian’s David Brindle has highlighted, the cut is not only “the meanest and nastiest cut of all in the carnage that is sweeping through our public services” but is based on flawed reasoning.

Although individual campaigning organisations within the disability sector might have a history of being vocal, as a whole, individuals with disabilities and their carers aren’t much known for taking off their gloves and sticking their heads above the parapet. Until now. A huge, vibrant and persuasive online community of writers and campaigners is fighting injustice through blogging and on twitter.

As blogger Ned Ludd Carer points out, the cuts are “about locking up disabled people in their own homes and taking away the desperately needed care…This doesn’t have to happen. We need to stop these cuts before they do any more damage. We carers need to get our heads out of the sand and start shouting. We need to stop being the silent, heroic martyrs the press and TV love to wheel out for a nice heartwarming end to the programme. We need to be Carers With Attitude.” The gloves are off.

Arbitrary Constant has highlighted the main concerns for the disabled while you can also read Community Care’s blog for a litany of cuts that hit the vulnerable.

Anyone in two minds about supporting the campaign – and there are already 2,500 names on the online petition to recall the consultation – should read blogger Bendy Girl who argues that the cuts should be everybody’s business, not just an issue for the disabled and their carers.

As the One Month Before Heartbreak campaign stresses, 100 years ago “disabled people were institutionalised and kept out of the public eye so that the public would need not feel embarrassed to look upon a disabled person.” The removal of DLA will trap the disabled in their care homes. And that’s something best consigned to the history books.

A 24-hour radio station for recovering addicts is among the new schemes in a Royal Society of Arts-led (RSA) project to put service users at the heart of their treatment and support, read my Society Guardian piece here.

Tweet
“People assume because we’re young and because we have suffered with a mental health problem, what we say is irrelevant,” says 19-year-old Edinburgh student Sarah-Jane Dougan. Dougan and Leeds-based Caroline Holroyd, 21, are members of Very Important Kids (VIK), a panel of campaigners advising mental health charity YoungMinds on its aims.

Both women have experienced mental health issues, including depression, for which they have undergone counselling and therapy. VIK aims to help shape health services; it recently worked with the Royal College of Psychiatrists, for example. Dougan and Holroyd’s brand of user involvement reflects health secretary Andrew Lansley’s patient-led vision for the NHS. Here they explain why politicians and policymakers should listen to them.

We got involved with VIK because… it was a chance to use our negative experience with mental health, and get something positive out of it. I’m sure a lot of service users have opinions on how their service can be improved or change, and they know what worked and what didn’t, and also what needs to be done. As part of VIK we have the opportunity to influence these things, and get the ball rolling to bring change (Sarah Dougan/SD).

Patients must influence services because… We’re the experts; real life experience is what has informed our opinions (Caroline Holroyd/CH).

Young people in particular must influence services because…we are the future, the next generation. We’re the ones who will be using these services in years to come (CH). Having a good service for young people will mean that they are less likely to have to use adult services when they are older. Prevention is better than treatment (SD)!

The key to real patient involvement is…engaging with people from all areas of society and making sure it is easy for them to get involved (CH). It’s about listening and actually hearing what the patient has to say rather than the organization simply making a bunch of decisions and then asking if it’s ok (SD).

Mental ill-health among the young…isn’t always openly discussed even within families where one or more of them has a mental health problem. Mental illness in itself is an issue that is kept under wraps because of the prevailing stigma, lack of education and the many myths surrounding it, sometimes perpetuated by the media (people with mental illness as serial killers, and so on) (CH). It’s an issue that people would rather admit wasn’t happening (SD).

The biggest problem with the mental health system is…the waiting times for receiving treatment, particularly talking therapies. People can be waiting months and even then not end up receiving the correct treatment for their condition. On the whole treatment can be very hit and miss, and support isn’t always sustained meaning people can be suffering in silence (CH). People can’t access services when they need it. If you have anorexia for example, mental health services only seem to recognize it when your body weight is so low that you need to be hospitalized. This is relying on the patients physical health rather than their mental health (SD).

The biggest problem with psychiatric units is…they can feel like prisons; they can be very disempowering (CH). Patients are there to get help – not to be punished (SD)!

The biggest difference the government could make in mental health policy would be…to treat it with the same seriousness and urgency as physical health (SD).

If we had five minutes with health secretary Andrew Lansley…we’d ask him what he thinks needs to change. If he has the same points as us – why hasn’t something been done about it before (SD)? I’d emphasise the importance of prioritising young people’s mental health services and how promoting emotional wellbeing and using early intervention techniques can prevent more severe mental problems which will ultimately put less pressure on the NHS (CH).

'Whatever else has gone down on this site, I’m fairly sure we’d not have got @JusticeforLB without it'

2014: I contacted #JusticeforLB right here on this now mess of a site. A brave, bold, truthful campaign harnessing the good in social media to push for action. Unforgettable.

After a fab @LearningMet event yday I popped into @PHMMcr exhibition just before closing.

Well worth a visit. Also got to see the #JusticeforLB quilt again in all its glory.

Whatever else has gone down on this site, I’m fairly sure we’d not have got @JusticeforLB without it 👊