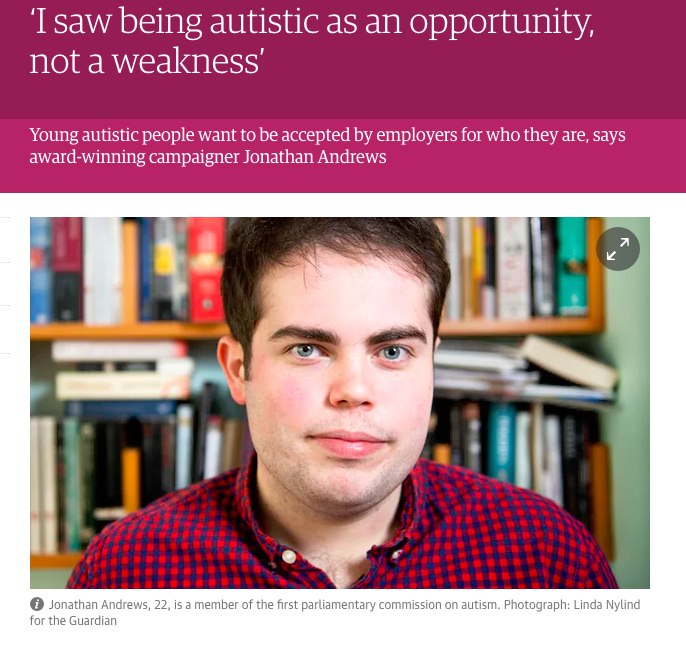 Jonathan Andrews was once advised to hide his autism from prospective employers. Instead, he is making his name by doing just the opposite.

The 22-year-old recently won campaigner of the year at the European Diversity Awards 2016 and talked to me about his work for a Guardian interview.

He’s involved in a plethora of awareness-raising projects, including sitting on the first parliamentary commission on autism. He also advised the government on its green paper on work, health and employment, which is out to consultation until later this month.

The graduate, who is an academic high-flyer, starts a trainee solicitor role later this year. He believes a law career will enable him to create practical change, but says combining law with campaigning is crucial. As he explains: “There is only so far legislation can go…you need to be winning hearts and minds to get change.” For his views on work and disability, see the full interview here.

He credits his family for their supportive role in his campaigning and he speaks powerfully about how his younger brother defended him against school bullies (“It was words like ‘retard’”). Jonathan stressed that it was in fact his brother who found it harder to deal with the verbal abuse: “I developed a thick skin, people used to tease me, but I always felt there would always be people like that and it was best not to focus on them. I came out in a better state than my brother, because I could shut it out and carry on – but for people who love you, it [trying to rise above verbal abuse directed at a relative] can be harder.”

An autism diagnosis at nine was, he says, useful in understanding his needs, but some of his parents’ friends reacted with sympathy. “The instant reaction was ‘I’m so sorry’. My mum would say ‘why?’ She said ‘my son hasn’t become autistic because of this diagnosis – it lets me understand it [autism] better; he’s always been my boy and is the same person he always was’.”

What struck me about Jonathan’s work – aside from the huge amount of awareness-raising at such a young age – is that he works on a range of diversity issues; along with autism, he raises awareness of mental health issues and LGBT equality. For example, he’s launching a best practice autism toolkit with the Commonwealth disability working group in April and hosting a related Commonwealth Day event in March.

He is also involved in promoting LGBT rights as co-founder of professional network the London Bisexual Network, challenging the idea that an autistic person “is not a sexual being because you are somehow ‘other’”. He adds of his campaigning on autism as well as LGBT issues: “People often think with autism you have to be interested in one thing and this means that you are great in one area and terrible at everything else.”

He also works to educate young people about domestic violence. He explains: “When I was child and I saw something that was wrong, I wanted to correct it and when I see something that is blatant injustice I just want to do what I can to help…[with domestic violence campaigning] I know what is is like to have a stable family, family that loves you, and I want others to be able to experience that.”

In fact, his broad range of campaigning interests reflects the change in attitudes which he is trying to achieve through his work: “People often think with autism you have to be interested in one thing and this means that you are great in one area and terrible at everything else.