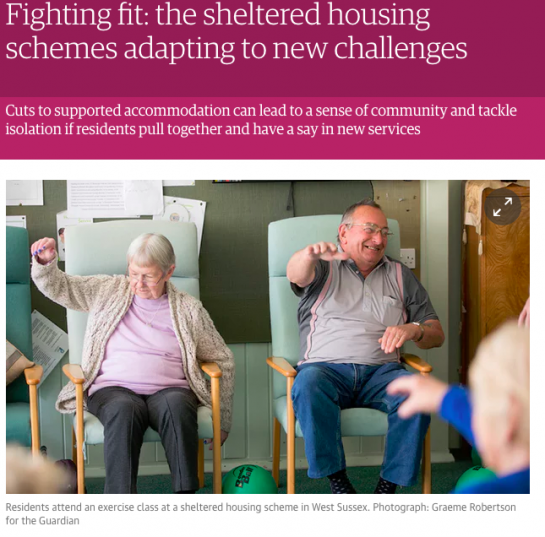 “A certain amount of support has gone, so this has made people themselves more involved with each other – we get together more.”

I spoke to older people like Val, Rene and Jane, who live in sheltered housing on the south coast, for a piece in the Guardian this morning; the comment above reflects how the kind of housing they live in has changed radically in recent decades.

Rene spoke to me about the shock felt by residents as support services are cut, their criticism of government and the need to rally round and adapt (with peer-to-peer support, for example) as help is scaled back.

Over 20 years ago, for example, the Worthing Homes sheltered complex I visited had housing staff onsite who ran activities. Now, thanks to years of government cutbacks to sheltered housing support, there are three frontline staff rotating across up to 2,000 homes in the region, depending on need, and drop-in sessions run by external experts.

But this kind of housing has suffered thanks to historic and widespread cuts to the supporting people fund (the national programme for housing related support available to councils). Now, it is at further risk. The government was forced last year to defer its unpopular decision to impose a cap on housing benefit to supported housing; the proposal was included in a recent government consultation and is due to covered in a forthcoming green paper. Campaigners including the National Housing Federation (NHF) have been challenging the funding plans, with Age UK warning of “uncertainty about the future of sheltered housing in the social rented sector”.

Residents’ concerns over the loss of on site staff in sheltered housing are well documented, but years of central and local government cuts mean that it is now the norm for on-site staff to be axed in favour of telecare and floating support (short-term help with specific problems like benefits). There are no precise figures, but a 2012 review by Joseph Rowntree Foundation noted that as far back as 2009, local authorities estimated that by 2011, 38% of sheltered housing would have floating support, not on-site provision.

The approach in the Worthing region, an area known for its high proportion of older people, underlines the value of sheltered housing as the population ages, and mirrors similar moves across the country.


Simon Anderson, Worthing Homes head of customer services, says the landlord and residents have tried to work together since the council funding cut: “We were asked to do much more work for less money…but ultimately this is a housing provider and its residents coming together [through agreeing new initiatives] at a time of austerity”.

A 2012 Age UK report, Making it Work for Us [pdf] suggests “listening and responding to the views of residents should be fundamental in shaping what sheltered and retirement housing offers”. Simon explains: “Some people who moved in when there was someone [staff] here all the time…Now they’ll be thinking ‘I didn’t sign up for this’…So in conjunction with them, we began discussions on what the future service would look like. Social isolation was a significant issue for many”.

With the green paper on such issues due after the election, and further funding changes looming, Simon acknowledges “the lack of clarity and certainty”, yet he is resolute: “We have no plans to withdraw our sheltered schemes as they bring significant benefits to our residents as well as savings to the public purse by maintaining our residents’ health, tenancies and independence.”