Given the scrap heap syndrome surrounding ageing women, how refreshing to nod to the centenary of International Women’s Day with a photographic project that shatters the stereotypes of older women. In fact, some of the glorious images I’ve been looking at (below), not only shatter the stereotype, but pick up the splinters and waggle them defiantly into the faces of those with age prejudice.

Hermi, 85, above and below: “I don’t really feel like an older woman, even when I’m hobbling about because my knee has got arthritis in it.” 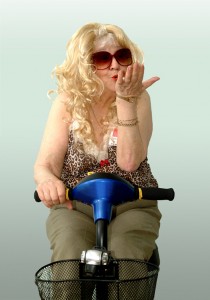 A series of exhibitions entitled Look at me! Images of Women and Ageing opens in Sheffield today, part of a joint project by the universities of Sheffield and Derby, cultural development agency Eventus and photographer Rosy Martin.

The project asked how older women feel about their public representation and the series of exhibitions in Sheffield feature images by local women. The women took part in workshops to create new and alternative images using photography, art therapy and video techniques. The workshops revealed not only how women feel silenced later in life, but how common it is for older women to feel pressure to deny ageing and or feel their sexuality marginalised.

Take one participant, 57-year-old Shirley (is 57 really that old, by the way?) who, when asked to pick an object to represent herself, chose a red high heeled shoe. She recently bought a red sports car to match her shoes: “The car and the shoes are things that aren’t safe, aren’t comfortable but are still part of me because there’s still that bit of me that has a bit of fire and sparkle… Yes, there’s the part of me that’s ageing, there’s a part of me that’s falling to bits but there’s this other bit and this car represents that.” 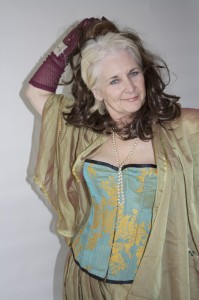 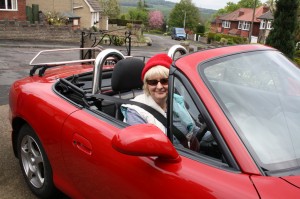 Shirley, 57, above: “There’s still that bit of me that has a bit of fire and sparkle”.

Shirley, who had a career in business management, wanted to participate because she was aware that she was entering a transition period and feared that these life changes signalled “the beginning of the end.”

Another participant, Hermi, 85, says: “I know I’m 85 so I know I am classed as an old woman. But I don’t really feel like an older woman, even when I’m hobbling about because my knee has got arthritis in it.”

If age brings widsom, then Hermi proves this by sharing a firecracker of a life lesson; the advantage of being an older woman is the freedom which accompanies age. Somehow, though, her own words pack a characteristically better punch: “If I want to wear a sleeveless top, I shall wear a sleeveless top and if my bra bothers me, I shall bloody take it off. That’s it. I mean there’s got to be a silver lining in everything, the silver lining in old age is that you can do what you like and nobody can tell you any different.”

To find out more about the ‘Look at Me! Images of Women and Ageing’ project and the free exhibitions, visit the website

Absolutely! Opened up invaluable conversations later in the morning about whole families and the importance of this for individuals. @NDTicentral @Saba_Salman https://twitter.com/jon_ralphs/status/1542079346650783746

My Life My Choice@mylifemychoice1·
30 Jun

Why is there a learning disability life expectancy gap? Here's a word cloud of answers from the 'Better Living' event we went to on Tuesday. Any one else see a clear message? #people #lack #support