On a Scotrail train a few weeks ago, my attention was caught by a sign with a smiling face and the words “thank you for not putting your feet on the seat.’” I felt immediate warmth towards the company as this positive reinforcement was a welcome change from the usual, punitive messages of “no parking”, “wait here until called” and “keep this area clear.” I’m sure most people can think of how some small, inexpensive communication has made them feel better or prompted them to behave differently.

To take a common example, the red and yellow arch of McDonald’s often provides the only whisper of colour on the landscape. Add words that lift your spirits are lifted and the impact can be dramatic; doesn’t “Happy Meal” sound more appealing than “burger and chips?”

Farther afield, the notorious favelas of Rio de Janeiro, Brazil, are painted in candy colours, the result of a collaboration between residents and community artists. This doesn’t tackle the underlying issue of poverty but it does encourage positivity and optimism.

We all know how much our world is lifted by a warm smile. It’s magical and powerful. Yet I have worked with communities that report a persistent frown, characterised by a bleak landscape and negative surround sound. I recently spoke to residents who, when ranking preferences for their surroundings, placed colour and affirming messages in their top three desires. They are willing to make these changes happen; people want to see their towns and villages reflect their personality and aspirations. And why not? It’s affordable and has a lasting impact on residents during times of reduced public finance.

Does it work? Yes!

Outside of Edinburgh in Stoneyburn, I suggested using the drawings and words of primary school children to represent the landmarks of the village’s local history. This is now about to happen; the schools are behind the idea and the community is delighted to see the village’s long and illustrious history visibly featured. They believe this will restore a sense of pride in their heritage. We have used children’s words and paintings to encourage people to “Do More: Drink Less” in Stoneyburn. Adults were touched and it made far more impact than dire health warnings.

Similarly in nearby Armadale, because people asked for it, the village will now bear bright, distinctive signage, displaying the faces and words of local residents who speak of their dreams for the community. They also want to show young peoples’ art in the city centre. Displaying the talent and ideas of their residents is important to them. 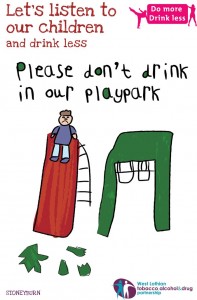 Above, a poster designed by a child in Stoneyburn, West Loathian, speaks directly to the community.

“Amazing Armadale” was the result of a series of creative workshops in schools, community halls, youth centres and at parents’ evenings. The result was a real consensus on what the town should look and feel like, and this has been put into practice. Armadale has held a music festival, regular “alcohol free Sundays” with street markets and a 5K charity run is being organised. This is real community change. Add their more colourful town centre and residents have helped to make quick, low-cost, tangible changes.

And it is local townspeople themselves who are making change happen – we’re not talking about huge budgets here. Earlier in the year, for example, 100 adults and children volunteered to take part in a clean-up in Stoneyburn. It’s also hoped that support will be offered from businesses with things like painting and gardening.

I would love to see more of this but, in terms of public services, I am struck by how little real creative dialogue exists between them and their constituents. Public consultation can be dry and driven by service references and needs. What if community engagement could be fun, lively and uplifting, allowing the language of participants to lead the discussion? Masterplans, blueprints, strategies and partnerships would rarely be mentioned. I know this because the techniques I use in my work elicit imaginative solutions from the most unlikely of people.

When I showed a class of 12-year-olds in East Lothian the logo of their local council, the first thing that came to mind for one youngster was the phrase “no ball games.” He views his council as a block to enjoyment. Others are likely to feel the same and the long-term impact of this attitude will drive further distance between councils and residents.

So, does this really matter, especially during a time of austerity? When I speak on this subject I get universal approval from audiences as diverse as business leaders, primary school children and local councillors. The consensus is that they are tired of a world that headlines bad news and displays signs that instruct and obstruct. In tough economic times, the need to create environments that lift, improve accessibility and value people could be more important than ever.

One thought on “What the golden arches reveal about community aspiration”

Typically honest, bittersweet post from Jude on the "ups and downs of living with a #braintumour". This latest bit is when she first noticed "the first tangible sign" of the after effects of radiotherapy #awareness #healthcare

One week left to fill out our survey for adult #siblings of people with a learning/developmental disability. Please don't miss your chance to have your say and tell us about life as an adult sibling. Please RT https://bit.ly/2S9KV1s @CEDAR_Warwick @DSAInfo @mencap_charity