Late night on the estate, London. Two hooded and capped teen boys hang out, waiting for a couple of teen girls. Nervously the girls approach. Tiana used to go out with Stigz, but she’s not sure about this new guy he’s brought along. She thought they were going out to a party, but the boys lead them to this new guy’s place. His parents are out. Tiana fights her instincts to run. The door shuts. The boys start to grab them. The girls resist but they won’t stop. Everything happens so fast…

Thankfully these events are just part of an awareness-raising film for Oii My Size, a youth-led project targeting teens. The Oii My Size project. For those not down with the kids, “my size” means “my kind of girl”. The project is based on a colourful website full of videos and pictures to help teens understand what makes relations between teen boys and girls appropriate and respectful. 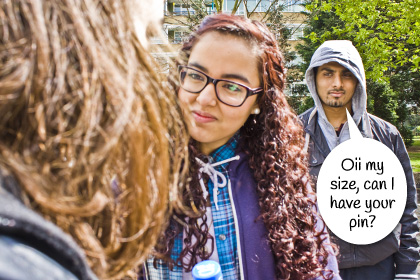 The scenario described above is, however, based on a true story and reflects the reality of life for many teen girls. From serious assault like this, to sharing naked pictures of them (sexting) and being spoken to disrespectfully, life can be a minefield for girls when it comes to teen boys. A recent study by the NSPCC reported up to 40 per cent of young people had been involved in sexting, mainly under pressure from other schoolchildren while a conference in Manchester run by the area’s Safeguarding Children Board heard reports from schools that sexting had become a “daily problem” affecting girls as young as 11 years old.

No one knows this better than the group of 12 teen girls who have shaped Oii My Size.

The girls, aged 16, from Pimlico, London, met to socialise until becoming involved in a Peabody Staying Safe campaign. The girls had previously worked with youth arts company Dream Arts to produce a warning video about staying safe around boys and jumped at the chance to spread the message about safe relationships and the dangers of sexting (sending indecent images to an under-18 is illegal). The video, which starred the girls themselves, is now on the Oii My Size site.

All of the girls had some kind of personal experience with the topic – whether affected directly, like the events in the video, or having friends who had to move schools due to sexting, or being exposed to abuse such as a Blackberry Messenger “slags list” – where girls are publicly named and shamed.

The girls were supported by Peabody, Dream Arts and youth-led media social enterprise Mediorite, which I volunteer with. Peabody worked with the girls under its Staying Safe campaign, Dream Arts supported them to work together and provided them with a specialist support worker for two hours each week after school.

As well as tackling issues such as sexting , Oii My Size focuses on disrespectful chat-up lines (or “churpz”) and when to say no in teen relationships. The magazine-style website also has light-hearted videos of teen boys trying out their best (read:worst) churpz on the unimpressed girls, like “Do you work at Subway? Cos you got me on a foot-long” and invites users to “rate my churpz”. This cleverly avoids preaching by demonstrating that the disrespectful churpz just make girls feel embarrassed, intimidated and degraded. In other words –boys- they do not work. 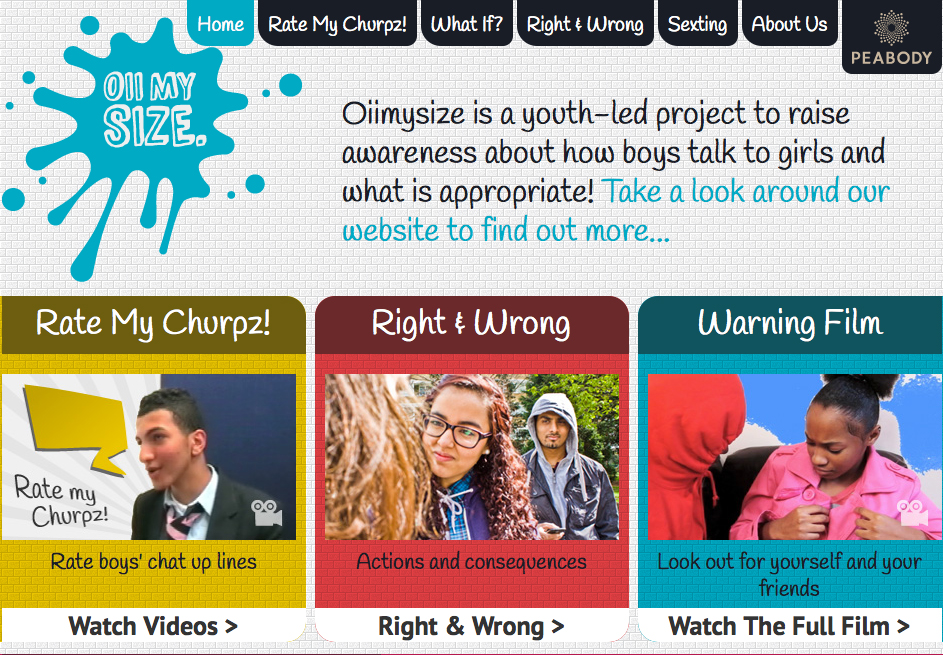 The website also contains a video of Althia Legal-Miller, a doctoral research student at King’s College, London, and an expert in female adolescence and violence. She explains the dangers of sexting, promoting the key message of “trust your instincts” to teenage girls in relationships.

The girls behind the project say they “have chosen this topic as we have realized that we feel intimidated and disrespected due to our gender.” Team member Shanice George explains that “hopefully the website will educate young girls and boys that sexting is illegal, cos we didn’t even know it was illegal until we started the project, and if we didn’t know how were other people to know? Also we wanted to educate boys on how they talk to girls… and we are now working with a domestic violence woman from Peabody and we would like to make girls aware about domestic violence too.”

Lucy Ferguson from Mediorite adds that the girls felt the topic “was a real, urgent issue that just wasn’t being tackled at school, and that no one was tackling it…The project was a success because the girls really challenged themselves to think about the audience.”

The girls not only gained new skills from the project but also won a Silver Arts Award, an Open College Network accreditation in project management via Peabody and a Nominet internet safety award. The website got 2000 hits in 24 hours the day after they won the award, and has been promoted at school assemblies by the girls to over 3000 people.

The project’s audience will undoubtedly grow, as Lucy Ferguson explains: “Most youth groups don’t really explore what someone who doesn’t know them is going to think of their project, they don’t think about how to sell and engage the audience, but these girls really got that. So ‘rate my churpz’ – as a traffic-driver is a really sophisticated idea. It shows they understood the need to engage boys too, and draw people in with a sense of humour, and then engage them with the harder content. Most youth groups are completely unforgiving to the audience. This was a much more sophisticated approach.”

Join us for a free City Lit Perspectives webinar on Wed 15 July – Principal Mark Malcomson in conversation with @Saba_Salman journalist & author of #MadePossible: stories of success by people with #learningdisabilities and Dan Pepper, Paralympian swimmer: https://bit.ly/2VG5Aes

So it's crucial we hear directly from learning disabled people about what's possible - and what needs to happen.

Shaun: 'We may have #learningdisabilities, but that doesn’t make us any less human than anyone else.'

Lizzie: 'I hope people read my story and realise that anything is possible'.