When women in Haiti added fruit flavouring to purified water and sold it to their peers, an impromptu community business was born. While the main aim was a health-related one – the women used purifying sachets distributed after the 2010 earthquake to clean the water – the unforeseen knock-on effect involved women educating their peers about not drinking contaminated water and running their own mini-enterprise. Read the rest of my piece on the Guardian Sustainable Business network.

Welcome to Luke’s World from Luke's World on Vimeo.

This film should stop you in your tracks. Its power to move puts it almost on a par, as Channel Four’s Jon Snow said at its launch today, with the seminal Cathy Come Home.

The short film by the charity the Private Equity Foundation (PEF) features 11-year-old Luke, one of the 1.6m children living in poverty today. As Luke explains his hopes for the future (or rather, his lack of hope) the film also focuses on the issue of NEETs (young people not in education, employment or training).

The film is part of the Luke’s World campaign to draw attention to the lack of opportunity facing children and young people and explain how their lives can be improved by creating better links between education and employment. As PEF chief executive Shaks Ghosh writes over on the campaign blog, Luke lets us briefly into his world and “gives us a glimpse of a national scandal: what life is like for the 1.6 million children still growing up in poverty in the UK today.”

He may only be 11, but already he knows that his dream to become a vet might never be fulfilled. The poverty he suffers, as Ghosh stresses, isn’t simply “the damp and peeling paint, the depressing tower blocks, the absent father, the 16-year-old sister who has left school to look after her baby and the mother who hasn’t worked for four years”. No, what Luke lacks is life chances and consistent support which will help him stay on the path from school into work.

The PEF has launched ThinkForward, a scheme to plug the gap between school and work. The aim is to support young people hand from 14 to 19, allocate them a personal ‘coach’ to support them with an action plan that encourages them to access local projects and work opportunities.

The launch of the campaign featuring Luke coincides with a report published today by The Work Foundation and the PEF that has uncovered 10 blackspots for youth disengagement – cities where between one in five and one in four young people are not in education, employment or training. The recession exacerbated this problem, with the largest increases in neet rates in those cities which already had high levels. Read more about it here.

As Ghosh has argued on this blog before, early intervention is vital unless today’s Lukes become tomorrow’s neets. 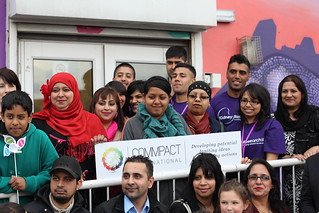 A year ago it would have been pointless painting a mural on the wall of Hutton Hall; it would have been covered in grafitti within a day. But after the building was transferred to community group Comm:pact by Birmingham city council in April, youngsters treat it – and its new exterior artwork – with pride. Read about how to make community asset transfer work in my Guardian piece today.

Jane Forster is a realist. ‘Homeless people with chaotic lifestyles aren’t the most attractive tenants to private landlords,’ she says.

It’s a realism that sometimes seems to be lacking among the policy-makers planning a bigger role for the private rented sector in providing homes for those most in need. The government plans to allow councils to discharge their duty under homelessness legislation with the offer of a home in the private sector in its consultation on the reform of social housing – whether or not the applicants agree.

The move, ministers say, will prevent applicants insisting on being offered social housing and will mean would-be tenants spend far less time in temporary accommodation waiting for the offer of a home. But are we really ready for a big expansion in the use of the private sector to house homeless people?

Can tenants, who are often vulnerable, simply be placed in the private sector and left to go on with it?

The experience of people like Jane Forster suggests that we will need to see a concerted effort to make the homeless tenant/private sector match-up work.

Forster is income generation officer at Mansfield District Council. Mansfield has been running an impressive scheme which offers dedicated support to both tenants and private sector landlords and which has just been a finalist in the Guardian’s public services awards.

The Multi Agency Rented Solution scheme – or MARS – is, despite its name, a down-to-earth solution to the problem of tenancy breakdown. Applicants from the council’s waiting list are offered help in getting money from a credit union for advance rent payments and then given ongoing support to help them stay in their new home. Landlords too have access to liaison officers who help them

The results are impressive. Since it was launched, it has helped some 120 people into a new private sector home, brought 48 empty properties back into use and cut repeat homelessness by 63 per cent. The scheme has been such a success, it is now being rolled out as a social enterprise.

But it’s not an easy fix: making an initiative like this work demands commitment. As Forster puts it: ‘The X factor is tenancy support. That’s what makes it work, when people are vulnerable and don’t have all the skills to live their life, they need ongoing support.’ Mansfield is not the only housing provider doing valuable work in this area.

Look Ahead Housing and Care, for example, has been a strong advocate of the need to make good use of the private sector in housing the ex-residents of homelessness hostels in the capital. Its approach has involved preparing residents for a move into the private rented sector and offering ongoing support as they settle in.

Landlords benefit too, getting the reassurance of proper assessments of their new tenants plus ongoing help, like mediation should the landlord/tenant relationship start to break down.

When it launched its plans for councils to make greater use of the private sector to house those on their waiting lists, the government said only 7 per cent of homeless applicants currently accepted a home in the private sector, compared with 70 per cent of cases which ended with an offer of social housing. We could see a big shift in these proportions once the new rules come in.

The element of compulsion in the government’s proposals doesn’t appeal. But it’s true that with a dire shortage of social housing, the private sector can and should be seen as offering a viable option for many people who would otherwise struggle to get a home. But the approach needs to be backed by proper, ongoing support. Otherwise we risk pushing some of the most vulnerable in our society into homes they will struggle to sustain.

For me, it was an eclectic yet potent combination of Wonder Woman, Kate Adie, Blue Peter’s Janet Ellis and Margot Fonteyn. Although I’ve yet to perform an arabesque while reporting from the frontline and deflecting bullets armed with nothing but golden bracelets and a roll of sticky backed plastic, I did at least pick some interesting female role models when I was growing up.

While it’s unfair to say that today’s girls and young women only dream of becoming reality tv stars, pop singers or footballers’ arm candy, it’s usually the case that the most successful women in the public eye tend to be very famous, very rich and very thin.

Campaigners at Pink Stinks are doing much to champion real, strong female role models who are “inspirational, important, ground-breaking and motivating” and today a new drive is launched to ensure that younger generations also have a range of professional female figures to look up to.

The business group everywoman has created the Modern Muse drive to inspire and engage the female business leaders and entrepreneurs of tomorrow by showcasing successful women in business. Although the majority are women in business and the private sector, there are – admirably – several powerful female role models from the public sector such as former Nurse of the Year Grace Vanterpool and Gill Evans, one of the country’s most senior policewomen.

Karen Gill, co-founder everywoman says: “Younger women today tend to have a strong focus on celebrity role models and we want them to be exposed to a much broader canvas, to women who have built businesses or are working in major organisations, whose lives are equally glamorous in very many ways.”

Modern Muse project aims to reach a million young women and girls over the next three years, to inspire and motivate them to look at business careers and entrepreneurship. The project will showcase stories of real women “whose experiences encompass ambition, passion, success and failure; showing that business is fulfilling and can also be fun and rewarding”. Many of the Muses will speak at community events and in schools, with the aim of nurturing female talent and encouraging women to start, own, run and grow companies.

Grace Vanterpool says: “Some of the role models that young women aspire to can be linked to their cultural or ethnic background and parental influences. Many young women in African Caribbean community aspire to become professional ‘divas’ and mothers – we seem to be less focused on getting involved in business. This may be due to the fact that there are not many successful business women who could become mentors to women from the African Caribbean community, and also to promote the benefits of setting and running a business.”

Vanterpool got involved with Modern Muse she wants her experience to inspire other women “to be the best that they can become”. She recalls, for example, that among the most patronising comments she’s had over the years are those that downplay her role. “Comments such as I am “only a nurse “, brought on by the perception that doctors who are predominantly male are usually the ones seen in senior leadership roles like mine.”

Metropolitan Police Detective Inspector Gill Evans says her motto is “it is not because things are difficult that we do not dare, it is because we do not dare that things are difficult.” She adds: “I feel passionate about inspiring the next generation of young women and girls to succeed whether it be in business or the public sector. I recall a number of times that I just needed to talk or run an idea past someone but couldn’t for fear of being seen as weak. I think that it is important that we continue to encourage young women and girls at every opportunity that they can reach their goals/aspiration regardless of their career choice.”

Modern Muse is launched with the publication of a book and a photographic exhibition by Mary McCartney. The book and exhibition focus on 100 inspirational female entrepreneurs and business women, personifying the ‘Modern Muse’.