When Parmi Dheensa’s son Callum kissed a classmate on the cheek not long after starting at a special needs primary school, a teacher asked his mother if this was “culturally appropriate”. Dheensa said that as long as the classmate was happy, nothing in her son’s Punjabi heritage forbade such displays of affection.

It is just one example over many years of professionals leaping to incorrect conclusions based on the ethnicity of her severely learning disabled son, who is now 19, says Dheensa. They also assume she does not work and is supported by an extended family when in fact she is a lone parent who works full-time. Dheensa, 43, was once told that her son’s support – he lives at home and is at a special school – was “better than it would be in India”. Fair point maybe, she says, but irrelevant to a British-born, Midlands-based family. 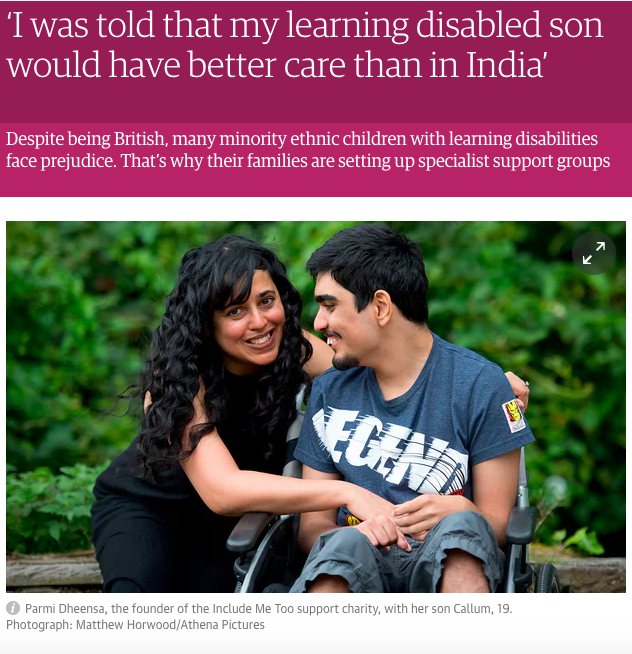 My Guardian article focuses on Parmi’s charity, Include Me Too, which works with 1,500 families a year. It has launched a campaign for the government to review its equality duties in relation to special needs education and support for BAME communities.

The charity has now launched a campaign asking the government to review BAME representation in government decision-making (existing involvement is, says Dheensa, “tokenistic”) and a new disability and equality strategy to ensure families get better support. The criticism is that professionals do not fully involve parents in reviews of the support they require, or in drawing up education, health and care plans, and parents or carer forums are predominately white British.